As a remote worker I find it really important to keep the ears busy throughout the day. It can be hard to work in silence, particularly without the constant murmuring of an office environment. Not only do I love being able to check out new music while I work, I also enjoy listening to a variety of different podcasts, one of which I am keen to recommend today.

Although most podcasts I listen to relate to film, music or sport, I also like to check out a number of design and games ones too. These tend to focus on the latest trends or upcoming releases but my favourite is a different beast altogether. A Life Well Wasted is more of an audio documentary than a podcast and each episode is painstakingly created by freelance journalist and aspiring radio producer Robert Ashley. Introduced as “an internet radio show about games and the people that love them”, the subject matter ranges from interviews with industry leaders to examinations of why people play games in the first place. Extensively edited, each episode includes original music produced by Robert himself which he cuts between his own commentary and interviews in a way that feels dreamlike and unlike anything else I’ve listened to.

Robert’s style is incredibly laid back and relaxed and it’s impossible not to feel the same way whilst listening. The soft, slick electronic beats he produces act almost as a score to each episode and if I wasn’t always working so hard on my client work (!) I’m sure I’d enter a trance like state during each listen.

A Life Well Wasted has been described by fans as “the finest video-game-related thing in circulation on the internet, even if you hate video games,” and I would have to agree with that. It’s impossible not to fall in love with the format and the content.

In addition to the fantastic podcasts themselves, each episode is accompanied by specially produced artwork by Olly Moss, limited editions of which can be bought on the Life Well Wasted website. 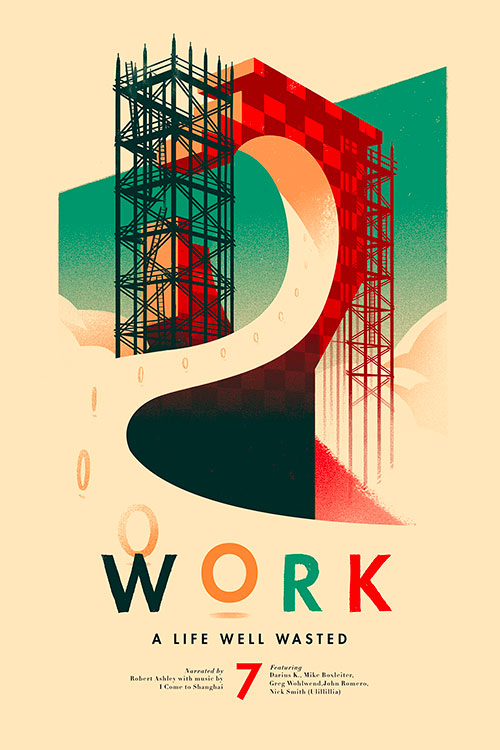 My only gripe? The fact that there have only been seven episodes so far and the most recent one came after a year long hiatus. Ashley seems to be spending more time on his music production career which although is a bonus for that industry, is not so good for the fans who are constantly checking iTunes in the hope that a new pod will start downloading.

So there you go, if my over enthusiasm hasn’t put you off I urge you to check it out the next time you’re wondering what to listen to. You won’t regret it.